ReTown President & Managing Director Jim Louthen’s education in landscape architecture has influenced our company’s philosophy to find that balance between man-made structures and nature at ReTown.  We recently saw this story about a wonderful development by architect David Adjaye in Johannesburg, South Africa.  The original story and links from Dezeen magazine can be viewed here. Adjaye Associates has unveiled a proposal to transform a 1970s industrial building in Johannesburg into luxury apartments and a hotel, with balconies covered in plants (+ slideshow). 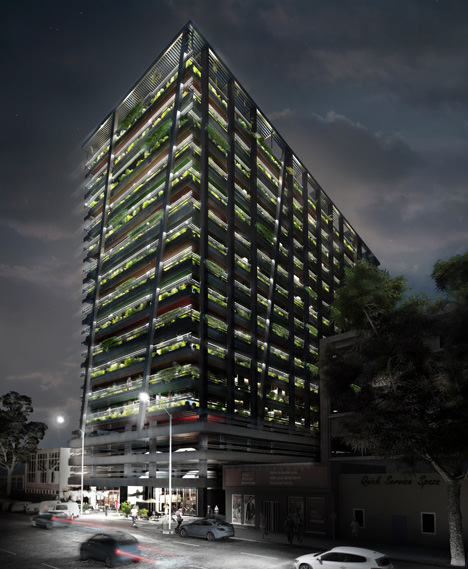 The 66-metre-high building was completed in the 1970s to house a growing diamond polishing industry. It will now accommodate apartments, as well as a hotel, shops and unspecified cultural facilities.

According to the firm, the modular structure of the building makes it flexible enough for a redesign that will make it fit for residential use. Visualisations show plants and trees added to most of its floors.

The Tanzanian-born British architect is currently working on several designs for the continent, including an office campus in Uganda. But Adjaye described the Hallmark House development as his “first big project in Southern Africa”.

“I think it will be a double take with a lot of people, because you will look at this building and think that it is in some other city, and then you will realise its in Johannesburg; it’s in Africa,” he said.

The aim is to “combine an African aesthetic with a contemporary vision”.

“The transformation of Hallmark House is an opportunity to apply fresh thinking to urban community and to address changing lifestyles with a more fluid approach to the way we inhabit cities,” said Adjaye.

Set to complete in May 2016, the Hallmark House redevelopment is the first in a series of projects planned by property developer Propertuity for Maboneng – a developing industrial area on the eastern fringe of Johannesburg’s inner city.

The area, which became a suburb of Johannesburg in the early 1880s, is now home to art and design studios, galleries, shops and restaurants.

Propertuity founder Jonathan Liebmann said the building’s former owner only agreed to sell after seeing Adjaye’s proposal, and claims that he will move into the building once it finished.

“I really believe in this project, I am truly going to to live there,” he said.